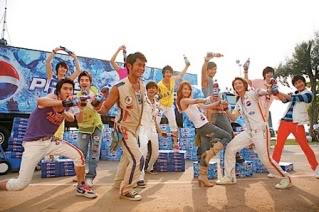 A while ago, Asia's biggest stars Louis Koo, Jolin Tsai, Show Luo and Lee Jun Ki went to Thailand to film a brand new commercial for the drink they are endorsing for.

The filming location is in the suburbs of Thailand and the production team booked the entire holiday inn as their base. Because this commercial involves 12 artistes, and the filming of the paper media advertisements and the commercial are to be carried on concurrently, time was very tight. The production team specially organised team games for everyone so as to let them develop more chemistry. For example, there were all sorts of ball games, Wii, IQ games and refreshment stores that cook on request. There was even a massage service.

These stars, who are very busy with work on normal days, played to their hearts' content. Lee Jun Ki, who seemed to be a badminton expert, beat everyone at the game. Louis Koo and Show Luo were engrossed in Wii's tennis and bowling games. As for Jolin Tsai, she was well taken care of by the males but was often subjected to teasing by Louis Koo and Show Luo. Everyone was on a holiday mood during filming this time and totally enjoying themselves.

Good to know that they are having fun working!