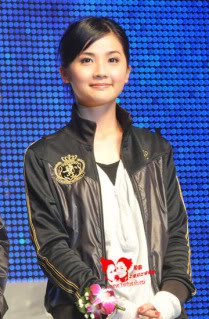 SHE turned the Edison Chen sex scandal into a song because she was sick and tired of how it kept diverting people's attention from other subjects.

Hong Kong singer-actress Charlene Choi, best known as one-half of popular Cantopop duo Twins, was not involved in the scandal.

But her gal pal and fellow Twins member Gillian Chung, 28, was.

Charlene, 26, who was affected because Gillian decided to take a break from showbiz, put all her sentiments into the song.

It is the title track of her debut solo album, Two Without One, released two months ago, and reflects her feelings in the aftermath of the sex photo scandal that began hitting the headlines in February last year.

'Back then, it came to a point that each time I was out alone on assignment, no matter what the event or promotion was about, everyone kept turning their focus onto other things (referring to the scandal) instead,' Charlene told local reporters.

'It seemed no one cared about what new projects I was doing and it got me really down for a while.

'At least we had each other to chat with if we felt bored.

'Now, it's just me, so I find myself getting listless more easily. When it's an uninteresting event, I have to catch myself from falling asleep.'

Around 50 of her Singapore fans who turned up at Tampines 1 with banners sporting the word 'Twins' and pictures of both Charlene and Gillian, would be glad to know that Charlene dismissed talk of a Twins split.

'We didn't split up, it's just that for now, Ah Gil (Gillian's nickname) and I are doing individual projects,' she said.

'There's no official date set yet as to when we'll be joining back together.

'However, next year marks Twins' 10th anniversary in the entertainment industry and I know both of us will be looking forward to it.'

While Charlene was candid in reminiscing about the good old days with Gillian, there was an out-of-bounds marker lying just ahead.

Any attempt to squeeze opinions from her on Edison and his now severed relationship with Gillian were futile.

Edison told the Hong Kong media that 'he had apologised to Gillian on MSN and asked her out for dinner as a gesture of goodwill, but was turned down'.

The words 'Edison Chen' proved to be taboo.

A reporter asked her: 'If a film producer wanted to get you and Edison to star in a film together, would you agree?'

Before she could reply, her Hong Kong manager, standing by the sidelines, cut in firmly.

'We have no comments about that.'

Charlene also cleverly deflected any talk about her 'rising popularity'.

After the scandal, while Gillian hid tearfully from the limelight, Charlene appeared to be doing very well.

Not only did she replace Gillian as sports brand Adidas' Hong Kong ambassador, she also landed a leading role in the movie The Butterfly Lovers that was initially meant for Gillian.

It seems that she can be just as successful a solo artiste, without Gillian and the Twins entity.

'Seriously, I don't know about popularity, I don't give much thought to it,' Charlene said with a shrug.

'I only know that I love my present job and I treasure it deeply. It'll be hard to imagine my life without work.'

Re: Charlene Choi misses fellow Twins member Gillian Chung, but it hasn't stopped her own popularity from rising

cecilia said edison never called any of the girls and apologized directly about the scandal >;[