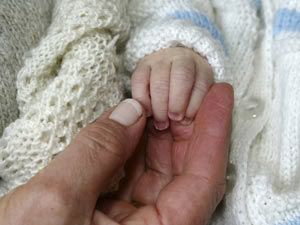 THE father of a starved 5-month-old US boy who died after his skin was eaten away by bacteria from a soiled diaper was sentenced in Illinois on Thursday to 100 years in prison for neglect.

'I don't believe that someone who would let a 5-month-old rot to death deserves an explanation for the harsh sentence, judge James Shadid said in ordering James Sargent, 24, to prison, reported Reuters.

Prosecutors Donna Cruz and Nancy Mermelstein said at the trial that little Benjamin Sargent's diaper wasn't changed for at least five days and possibly up to a week, reported the Journal Star.

He wasn't bathed for about nine days.

His last meal likely came three to four days before he was found lifeless on 12 Feb last year.

Prolonged exposure to that unchanged diaper caused his skin to be eaten away and allowed bacteria to seep into his body, ultimately causing his death.

'It's pretty difficult to think of a more horrendous series of events than those caused by the defendant,' Ms Cruz said.

'He took a defenceless 5-month-old, strapped him into a car seat, put him into a crib and left him there for days on end.'

Sargent's lawyer, Mr Willing Lovely, said his client was mentally ill and suffered from a slew of problems, all of which contributed to his neglect of his son, reported the Journal Star.

As he left the courtroom, Sargent didn't look back at his parents or the parents of his former girlfriend, Tracy Hermann, who's also facing murder charges.

Sargent's parents were shocked and stunned with the decision. Both said they believed a sentence closer to the minimum of 20 years was more appropriate, considering their son will have to serve 100 per cent of his time.

Oh my goodness, what kind of father is this?
It would've been better for the baby to not come into the world.