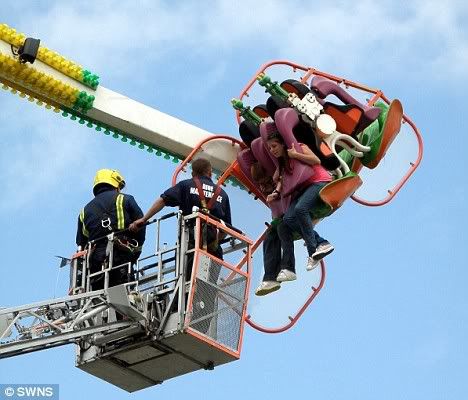 This is the dramatic moment two young girls were rescued after spending an hour dangling face-down, 50ft up in the air on a fairground ride.

The ten-year-olds – along with a man and his son – had been trapped after one of the girl’s mothers called out to the operators to stop the machine because she wrongly thought a safety harness was not secure.

Twenty firefighters were called when safety devices on the ‘Xtreme’ ride, which spins 360 degrees, left the four suspended in the air.

The ride at Brean Leisure Park, Somerset, has passengers in two ‘cages’ attached to each end of a spinning, metal arm. The girls were in one cage, and the man, in his 30s, and his son, who is about ten, were in the other.

Fire commander Ian Hazelton said that soon after the ride started one of the girls began gesturing to her mother on the ground, saying it was not secure.

He went on: ‘The mother shouted at the operators to stop the ride, which they did, leaving them suspended in the air facing down towards the ground. The girls soon became hysterical.’

As the ride was stopped during its cycle, safety mechanisms locked it in place and the firefighters had to use a turntable ladder to rescue the four.

Mr Hazelton added: ‘They were all distressed and were seen by paramedics but had no ill effects.

‘We can confirm there was no mechanical fault with the ride.’

The theme park said: ‘The Health and Safety Executive are satisfied the ride can be re-opened.’

Re: Terror at the fairground as girls are left dangling face-down for an hour

The passengers of these kinda rides should seriously make up their mind before they ride the thing because, these things can happen.
_________________