A Chip of the Old Block

A Chip of the Old Block 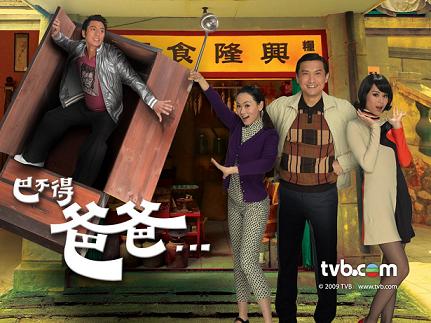 Synopsis:
As the proverb said ""With a distinguished father such as you, the son is sure to do well". However, for this pair of Father and son, it is quite difficult because both of them have different characters, different way of doing things and even their life goals are totally different from each other. Father, Chor Fan (Sunny Chan) has feelings of a man in the 60s, Son, Chor Ci (Ron Ng) finds that he is too slow as compared to others who are living in the 21st Century. A comedy which shows a travel in time. The circumstances that happen will not only cause positive aftertaste, but allows one to think about the meaning behind 'There's no inborn talent to become a powerful person overnight; A good man should work hard and stand up strong on his own feet'.

Chor Ci from the 21st Century went back in time to the 60s when his father was in his youth. Father and Son became best of brothers. Chor Fan sheltered Chor Ci and Chor Ci came to know the stingy boss of the Noodle Stall Ko San Chuen (David Chiang), the fierce landlady Tam Lan Ching (Gigi Wong), Bickering Lover Ching Lan Fun (Shirley Yeung) and the rich young lady Leung Pin Pin (Nancy Wu). Chor Ci offended many people and seldom greet others. Hence, he wasn't well liked by many other neighbours such as the police sergeant Ngau Ching Wing (Louis Yuen). There is only Chor Fan who protects him all the time and even introduced him to work at a departmental store. However, Chor Ci, who is over ambitious, only knows how to blame his father for being too old-fashioned and allows others to take advantage of him. Chor Ci almost caused many other neighbours to lose their homes. Chor Ci also spoilt his father's relationship with the con-lady So Fung Nei (Myolie Wu). When he started to regret his actions, he realised that he is actually.....

*Credits: Tvb: A Way of Thinking

Anybody anticipating for it or already watch it?? Haha, I can't wait to see it xD It looks funny^^ I'm a fan of comedy xD

Just started watching this series as not so busy with studies now. It's quite funny and good for a laugh. I think Myolie is a little too exaggerrated but maybe thats for the comedy effect. The girl that plays Myolie's sister is pretty good too, her name I beleive is Mandy Wong.

aw, I see xD I really hope I can start on this soon xD

it really is a pretty good series actually, outa expectation, thought its gonna sux but it's pretty funny