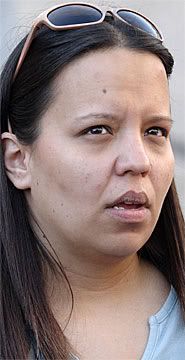 A woman in Minnesota has been ordered to pay $80,000 a song to record companies for illegally downloading tracks and violating copyright laws. A federal jury ruled that Jammie Thomas-Rasset willfully violated the copyrights on 24 songs, and awarded record companies $1.92 million.

The single mother of four from Minnesota was found liable for using the Kazaa peer-to-peer file-sharing network to download the songs over the internet. Thomas-Rasset, 32, had been convicted previously, in October 2007, and ordered to pay $220,000 in damages, but the judge who presided over that trial threw out the verdict and ordered a retrial after he misdirected the jury.

The Recording Industry Association of America (RIAA) and big music labels have sued thousands of people for downloading and sharing music illegally, with most agreeing to settlements of between $3,000 and $5,000.

Thomas-Rasset was the first among those being sued to refuse a settlement and instead took the case to court, turning her into the highest-profile digital pirate in America.

She sat glumly, chin in hand, as she heard the jury's finding of wilful infringement, which increased the potential penalty. She raised her eyebrows in surprise when the jury's penalty of $80,000 (£49,000) per song was read out.

Outside the courtroom, she called the $1.92 million figure "kind of ridiculous" but expressed resignation over the decision.

"There's no way they're ever going to get that," she said. "I'm a mom, limited means, so I'm not going to worry about it now."

Her lawyer, Kiwi Camara, said that he and his client had not decided whether to appeal or pursue the RIAA's settlement overtures.

Cara Duckworth, for the RIAA, said that the industry remained willing to settle. She refused to name a figure, but acknowledged that Thomas-Rasset had been given the chance to settle for $3,000 to $5,000 earlier in the case. "Since day one we have been willing to settle this case and we remain willing to do so," Ms Duckworth said.

In December, the RIAA said that it would stop suing people who download music illegally to concentrate instead on getting internet service providers to take action. The move away from litigation represented an important shift in strategy for the music industry group, which had filed lawsuits in the US against some 35,000 people for online music piracy since 2003.

The focus on ISPs penalising illegal file-sharers is one of the main proposals in the new Digital Britain report published this week.

In testimony, Thomas-Rasset denied she shared any songs. The self-described "huge music fan" raised the possibility for the first time in the long-running case that her children or ex-husband might have done it. The defence did not provide any evidence that any of them had shared the files.

The recording companies accused Thomas-Rasset of offering 1,700 songs on Kazaa as of February 2005, before the company became a legal music subscription service after a settlement with entertainment companies. The music industry tried to prove only 24 exemplary infringements.

The court heard that Thomas-Rasset made the songs available on Kazaa under the screen name "tereastarr" – the same nickname that she acknowledged having used for years for her e-mail and several other computer accounts, including her MySpace page.

MediaSentry, the copyright security company, traced the files offered by "tereastarr" on Kazaa to Thomas-Rasset's IP address and to her modem.

The recording industry has blamed online piracy for declines in music sales claiming it has lost billions of dollars through illegal file-sharing.

yea...this was all over our news broadcast..haha. got to be more careful when dling now...LOL

>< is downloading music for free illegal ??